A video seen nearly a hundred thousand times on Facebook, Instagram, and Twitter claims to show Peter Obi, the presidential candidate of the Labour Party (LP), “begging Nigerians” to vote for Atiku Abubakar of the Peoples Democratic Party (PDP) in the upcoming 2023 presidential election.

The video, posted by former Senator Dino Melaye, a campaign spokesperson for the Atiku Campaign, was shared on October 30, 2022 with the caption “Peter Obi begging Nigerians to vote Atiku”.

Melaye’s video, which was shared across major social media platforms has been archived here, here and here.

Is this a deep fake?
To verify whether the video is a deep fake, we analysed it using Deepware, an Artificial Intelligence (AI) tool for scanning suspicious videos to find out if they are synthetically manipulated. The model results showed that no deep fakes were detected. 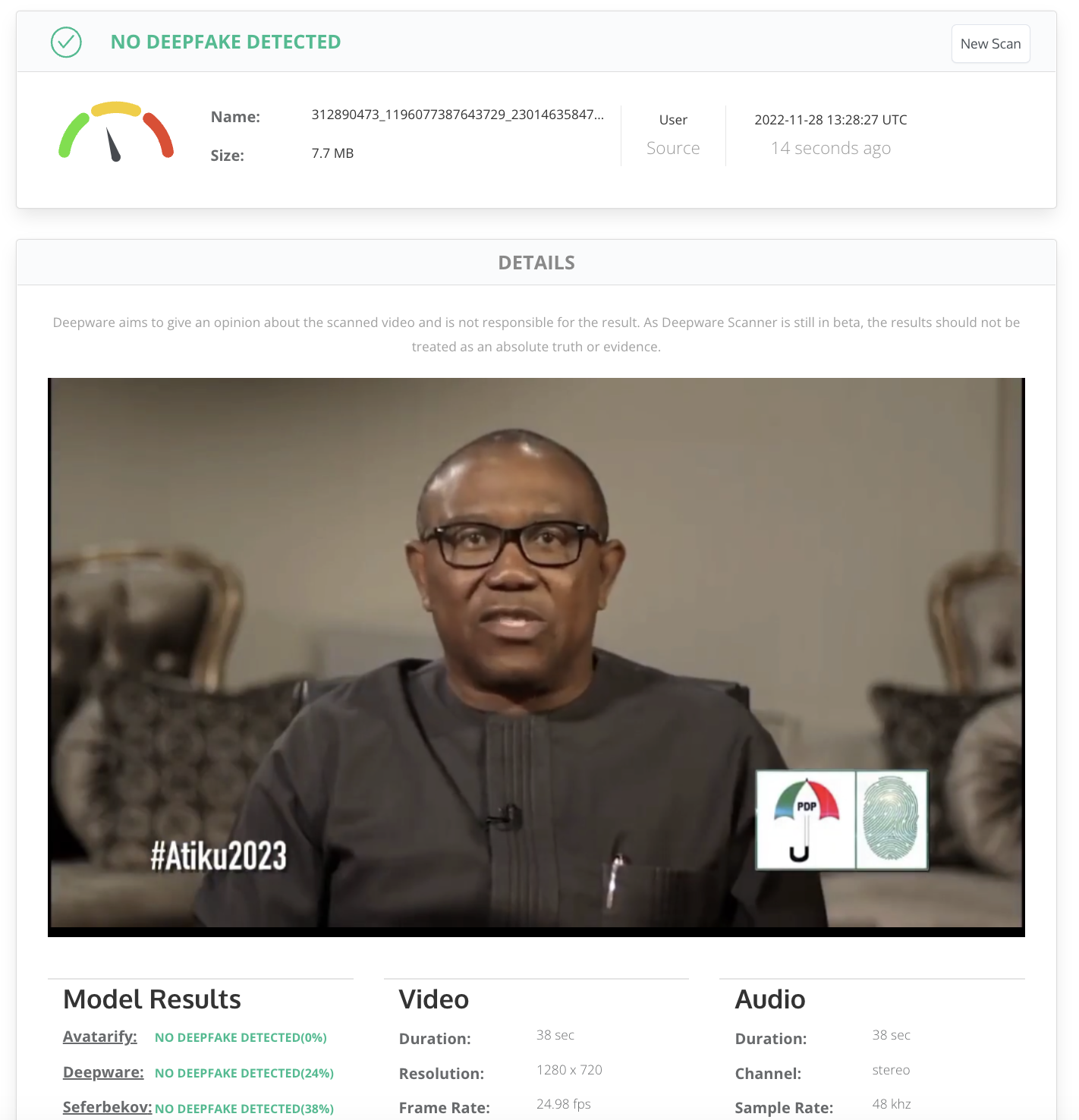 DeepWare analysis shows that the video is not a deep fake — it’s an actual video.

Key Word Search
Taking our investigation a step further, we ran keyword searches via Google and YouTube. A search for the words “Obi campaigning for Atiku 2019” led us to this video uploaded by Viable TV in February 2019, showing Obi asking his kinsmen to go out and vote. In this video, Obi spoke primarily in Igbo.

“I know people are saying that it is difficult to vote especially when trouble starts, but I am begging you that it would be very bad if we have another term in this man’s hand, Nigeria would not exist,” Obi said in Igbo language.

The frames in the 2019 video, show that it was shot at the exact place seen in the political advertorial posted by Melaye in 2022.

In both frames, we see Peter Obi donning what looks like the same cloth, with the same lapel mic, pocket pen, glasses, and the same angle of lights on his forehead. While the content of the videos is in different languages, we can guess that the video was taken on the same day, and at the same place.

However, guessing is never enough. So we took our investigation another notch higher by checking Obi’s social media accounts for content from 2019. We did not see the exact video, but we came across numerous hashtags used in the 2019 elections, including #LetsGetNigeriaWorkingAgain. We then checked all the related hashtags on Twitter, going through the video section, until we came across the exact video, where the audio used for Melaye’s post was extracted.

The original video was uploaded in January 2019, when Obi was on the same ticket as Atiku Abubakar. It was not shot in 2022 as Melaye would have Nigerians believe.

We can confirm that the video was shot in 2019, and does not show Peter Obi begging Nigerians to vote for Atiku in 2023. We recommend that citizens be wary of videos, posts, pictures or news clippings that show Obi campaigning for Atiku. They are old and out of context for the 2023 elections.

CDD Election War Room also anticipates that there will be attempts to push this video days before the election alongside narratives that Peter Obi has stepped down for his former party man, Atiku Abubakar. We advise citizens to always check the appropriate handles and media outlets for confirmation.

Are Nigeria’s Federal, Appeal and Supreme Courts Headed by Christians?

Did Members of the PDP’s Executive Committee in Kwara State Decamp to APC?

CDD Fact-check was set –up in 2018 as an independent fact-checking operation, based out of the offices of Centre for Democracy and Development (CDD) West Africa – legally registered non-profit organization in Nigeria.